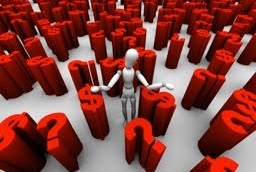 History serves as a great educator when it comes to our only guarantees in life—death and taxes. Yet taxes are not always as evident and straightforward as we might assume. In fact, many taxes are hidden in plain sight and for today’s savers, what you may not know really can hurt.

History provides a glimpse into some of the more creative and varied ways governments have effectively taxed citizens and consumers. In Roman times, Emperor Nero had his method of shaving gold and silver coins to devalue the money supply (i.e. inflation), and devalue repayments of the empire’s debts.   In more recent times, we have seen similar strategies. In 1971, the U.S. government stopped backing our currency with gold, causing its value and the federal debt, as measured by gold, to drop 90%. These are both examples of taxation by policy, sleight of hand, or sleight of paper.

In today’s general media conversation, the subject of taxation is addressed from the standpoint of our U.S. representatives’ legislation:  How will we address U.S. deficits and debts?  Will Congress vote to extend the debt limit beyond $15 trillion?  Will the 2001 tax cuts extend beyond 2012?

Perhaps the real questions we should be asking ourselves are: How is the government addressing the dual deficit/debt problem today? Who is footing the bill? And how is it impacting us as savers and investors?

We instinctively know the answer to the “who”—it’s every U.S. citizen—you, me and your next door neighbor. We also know that every taxpayer is not necessarily responsible for the proverbial spilled milk in the US economy’s kitchen.  Nonetheless, if you’re heavily invested in cash today, you may be mopping up more than your fair share of the mess.

This is because taxation by policy is such a prevalent practice today relative to our monetary policy. As the government unloads its debt by increasing its issuance of Treasury securities, it may also benefit from the liquidation of its debt by maintaining a negative real interest rate. Real rates are negative when inflation is greater than nominal interest rates (i.e. quoted rate on your bank statement), a condition that always favors debtors like our government. Savers, on the other hand, are effectively taxed.

When the goal is to unload debt, highly indebted governments have been known to urge the private sector, especially banks and large funds, to purchase Treasuries through policies that have been referred to as “financial repression.” This occurs when interest rate ceilings on savings deposits and loans, as well as Federal Reserve requirements for banks, encourage the banks to turn to Treasuries. We have seen similar financially repressive strategies throughout history. Between 1933 and 1980 federal Regulation Q allowed the Federal Reserve (Fed) to prohibit, or attempt to prohibit, banks from paying any interest on demand deposits. President Roosevelt’s prohibition on private holdings of gold was a prime example of financial repression.  Nowadays, federal Regulation D allows the Fed to set reserve requirements and the Fed’s Effective Federal Funds Rate (the negotiated interest rate that borrowing banks pay to lending banks when they borrow overnight funds) has been kept below 1% since October 2008.

As Carmen Reinhart discusses in her article “The Liquidation of Government Debt,”[1] financial repression was very successful in rallying the private sector to purchase US debt after WWII; however, since 2007 the Treasury has increasingly relied on the Fed to purchase its securities… 2009 was unprecedented in that the Fed purchased 80% of the securities issued by the Treasury that year[2]. Under its recent “quantitative easing” program, the Fed passed China as the primary owner of US debt in February of this year and is expected to hold $1.6 trillion in U.S. Treasury securities by the end of June 2011. This practice pushes interest rates down, effectively raising inflation as the Fed is printing more money to buy its own government debt.

How do these policies affect bonds? The post WWII era in the U.S. (1945 to 1980) has been largely categorized by financial repression. During this period bonds almost universally yielded negative returns. Likewise, when real interest rates are negative, as has been the case for the majority of the period 2007-present, saving money in cash is the equivalent of losing money. The graph below illustrates the relationship between Treasury bill rates and the average annual rate of inflation. 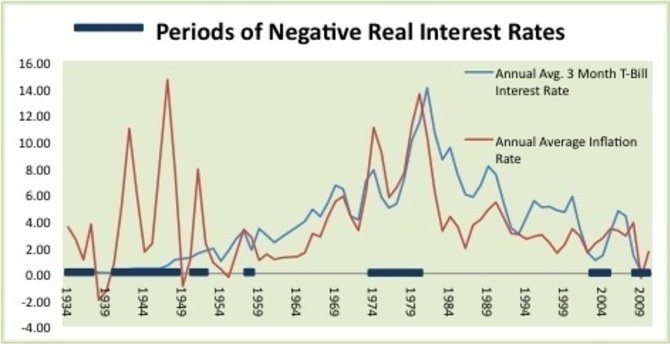 1 Highlighted areas on the horizontal axis represent eras of negative real interest rate. The primary era of financial repression lasted from 1945 to 1980.

Everyone’s personal situation is distinct and has its own set of nuances.  For this reason, consider scheduling time to discuss potential strategies and opportunities that may benefit your specific needs and goals.